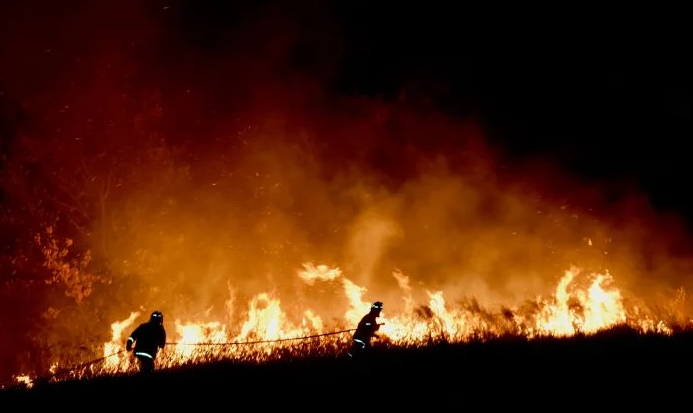 The flawed management of bushfire risk

The flawed management of bushfire risk

The disastrous 2009 Black Saturday bushfires in Victoria cost 173 human lives, destroyed more than 2,000 homes and caused immeasurable environmental damage across 450,000 hectares, generally to the north and east of Melbourne. In keeping with dozens of other post bushfire disaster inquiries, Recommendation 56 of the 2009 Victorian Bushfires Royal Commission Final Report stated:

The State fund and commit to implementing a long-term program of prescribed burning based on an annual rolling target of 5 percent minimum of public land.

This recommendation is based on decades of applied fire research and experience that has demonstrated management of forest-fuel levels across the landscape is the most effective bushfire risk-mitigation tool available to public and private land managers.

The Victorian Government supported all of the 67 recommendations of the final report and committed to implementing each of them. The May 2011 report of the then state’s then Coalition government, “Implementing the Government’s Response to the 2009 Victorian Bushfires Royal Commission“

Although we are still in the shadows of the horror of the 2009 bushfires, after two relatively benign summers one can already sense growing complacency in the community about the threat of fire. As has been so tragically shown, such complacency can have devastating consequences.

By 2013, there was ongoing and, at times, quite ill-informed public debate over fuel-reduction burning. The responsible land management agencies had been unable to meet the minimum annual burning target recommended by the Royal Commission. Consequently, the Victorian Bushfires Royal Commission Implementation Monitor (VBRCIM) questioned whether an area-based performance measure would achieve appropriate risk reduction and, beyond that, whether it was affordable or sustainable. Despite Victoria having applied the drip torch to over 250,000 hectares during 2012-13 (its highest annual burnt area since 1983), the VBRCIM recommended that the annual burning target be discarded in favour of a strategic risk-based burning approach.

In less than four years, the growing complacency appeared to have spread to Victorian public agencies responsible for mitigating risk to fire prone communities. For the six years following the 2009 bushfire disaster, the gross area of prescribed burning averaged 184,000 hectares or 2.39 per cent of the 7.7 million hectares of state forests and parks and other land managed at the time of the Royal Commission Report by the former Department of Sustainability and Environment. This was less than half of the minimum target recommended by the 2009 Bushfires Royal Commission.

The Gippsland Region Joint Fuel Management Program 2018/19 – 2020/21 report provided the following summary of how bushfire risk would be better managed under a strategic risk-based burning approach.

In 2015, the Victorian Government set out a new approach to reducing the risk of bushfire in Victoria called Safer Together.

Residual risk, is the risk, on average, that bushfires will impact on life and property across the landscape. It is expressed as the percentage of the risk that remains after bushfire history and fuel management (mainly planned burning) activities are considered.

The Gippsland Region’s contribution to meeting the state-wide JFMP risk reduction target anticipates 88,000 ha per annum of fuel management in the 2018/19-2020/21 JFMP.

A greater risk-based focus to operational planning has allowed Districts to improve consideration of ecosystem resilience.

The ‘residual risk’ concept is controversial and something of a mystery because it has never been fully explained in any published research paper outlining the assumptions and thinking that underpin it.

Fire practitioners, who gained their education and experience in the second half of the 20th century always understood that bushfire mitigation, achieved by undertaking annual prescribed or fuel reduction burning across at least 8 per cent of the forested landscape, did significantly reduce the risk of bushfires affecting properties.

By contrast, modern-day fire managers rely on computer simulations to justify fuel reduction burn levels that have demonstrably failed to provide adequate bushfire mitigation at a landscape level. Since the implementation of the so-called risk-based approach in Victoria, the average annual gross fuel reduction burn area for the three years 2017-19 has been less than 1.34 percent of the 7.7 million hectares of state forest, parks and other public land.

Based on the current fuel reduction burn levels and a residual risk of 70 percent, in Russian roulette terms, fire prone communities arguably face a 10-shot revolver, with as many as seven loaded chambers. Regardless of what the computer models outputs may suggest, the reality is this: fire prone communities now face a bigger wildfire risk than would be the case, if the 2009 Royal Commission fuel reduction burn levels were fully implemented.

What has the risk-based focus delivered for the fire prone communities and biodiversity of the Gippsland Fire Region in the 2019-20 fire season?

After three years of below average rainfall, more than 1.5 million hectares were burnt, with the tragic loss of five lives. Over 400 homes and 650 non-residential structures were damaged or destroyed. Despite giving improved consideration to ecosystem resilience, the risk-based approach has delivered massive destruction to biodiversity across the megafire-affected areas. Using CSIRO 2007 estimated density of birds, mammals and reptiles per hectare, the likely toll of wildlife risk managed to death, would be in the order of 250 million.

Throughout the 21st century, public land and fire management agencies have increasingly turned away from forest fuel management at a landscape level, in many cases, to allegedly protect various threatened and other species from inappropriate fire regimes. The risk-based approach has delivered a Silent Spring disaster for wildlife, reminiscent of DDT impacts on wildlife in the 1940-60s period. The difference is that governments took positive action to address the impacts of DDT. In the case of bushfire risk management, it appears that biodiversity receives little or no consideration under the residual risk methodology.

the Safer Together approach means that local communities, property holders and land and fire agencies are more involved in decision making about bushfire management all year round.

Fuel load maps are a critical piece of data needed by local communities and property owners, if they are to be more involved in decision making. Given the stated intent, it is unconscionable that, at last report, these maps are still being kept secret by the Victorian Government. What we do know is three-dimensional forest fuel loads are at unprecedented levels across most forest areas in Victoria.

Bushfire management experience gained across Australia over the past century has been thrown out by 21st century fire and ecologist academics and managers, who bring a one-dimensional view to the management of fire in the Australian landscape. The risk-based approach was destined to be, and has proven to be, a fool’s errand. However, the Victorian government continues to accept advice from academics with little or no experience in the line of fire, while ignoring decades of hard won experience in the real world of bushfire risk mitigation.

This summer has been a mild one in Victoria — plenty of rain and cooler-than-normal weather, which means the bush and its future fuel loads have grown. Come the next drought, it will cure and it will burn as surely as the sun rises in the west. Bushfire managers and advising academics don’t seem capable of grasping this simple truth.

The Safer Together policy, from both a biodiversity perspective and the protection of human lives and property, is most aptly described as no better than a public relations slogan — a slogan, quite literally, to die for.

Peter Rutherford has a forest science degree and has been a professional forester for over 40 years. He is a member of the Institute of Foresters of Australia, is secretary of the NSW South East Timber Association and has fought fires with government forest agencies and as a volunteer.