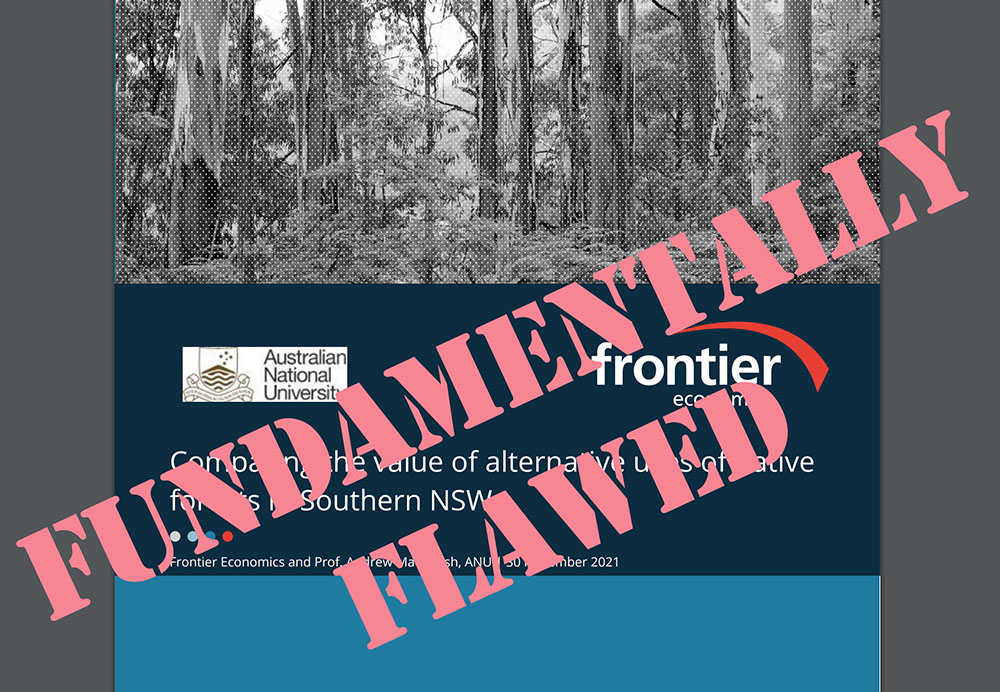 By FWCA Admin8 December 2021Uncategorised
No Comments
Spread the word

Forest workers, their families and communities have been deeply disturbed by an economic analysis released last week by the Australian National University and consultancy firm, Frontier Economics. The report was co-authored by ANU law professor, Andrew Macintosh.

The report advocates for an immediate halt to all native forest harvesting on state forest in Eden and Southern Regional Forest Agreement (RFA) areas. This move would strip $100 million dollars in forest product sales out of south coast economies each year.

The report authors make the claim that over the next 30 years, NSW taxpayers will be more than $60 million better off.

A major flaw in the report is around the $80 million dollars of the economic benefit each year arising from avoided harvest, haul and processing costs.

This $80 million has been accounted for in the cost-benefit analysis as a saving to taxpayers, but it is not.

These operations are an expense paid for by timber processors out of the $100 million in revenue that flows from the sale of forest products. What are claimed to be avoided costs to the taxpayer are actually income that will be stripped from regional families, businesses and economies.

The report goes on to state that avoided carbon emissions associated with logging provide significant benefit to society. Aside from errors in the detail of the calculations, there is a major sticking point, with the $18 to $22 million revenue that is supposed to arise from carbon trading.

Currently there is no legal basis for this form of carbon trading. In Australia the only type of forest that is currently eligible for carbon trading is defined as ‘reforestation’. This is land that has previously been cleared but now converted back to tree production. None of the carbon funds will actually come into local communities.

The third and minor revenue contribution the report identifies, is tourism revenue generated from recreation, which cannot occur in active logging sites. The specific venture is a proposed mountain biking development.

There has also been a major omission from the report. As the state forests would no longer be generating any revenue, management of the 415,000 hectares of state forest in the Eden and Southern RFA areas would have to be fully funded by taxpayers.

Latest figures show the taxpayer contribution to managing national parks is $50 per hectare higher than for state forests. The cessation of harvesting would deliver an annual additional burden on taxpayers of $20.75 million or $622.5 million (not inflated) over the 30-year analysis period.

The contents of the report are a clear example as to why academics and economists should not be allowed anywhere near decision making processes for small to medium sized regional businesses. The content of this report is misleading.

The ANU must explain why a law professor is using the ANU logo and website to promote his anti-native forest harvesting views. Professor Macintosh was requested via email to specify the source of the funding for this report. To date, he has not responded.

Given the fundamental flaws in the report, the claim that ending native forest harvesting in the Eden and Southern RFA areas of NSW and using them for mountain-biking and carbon farming will deliver total benefits of more than $60 million to taxpayers over the next 30 years appear to lack any factual base.

The savings are predicated on the cessation of native forest harvesting from 1 January 2022 and would give affected families and businesses less than a month to adjust to the outputs of the fantasy world of this economic modelling.