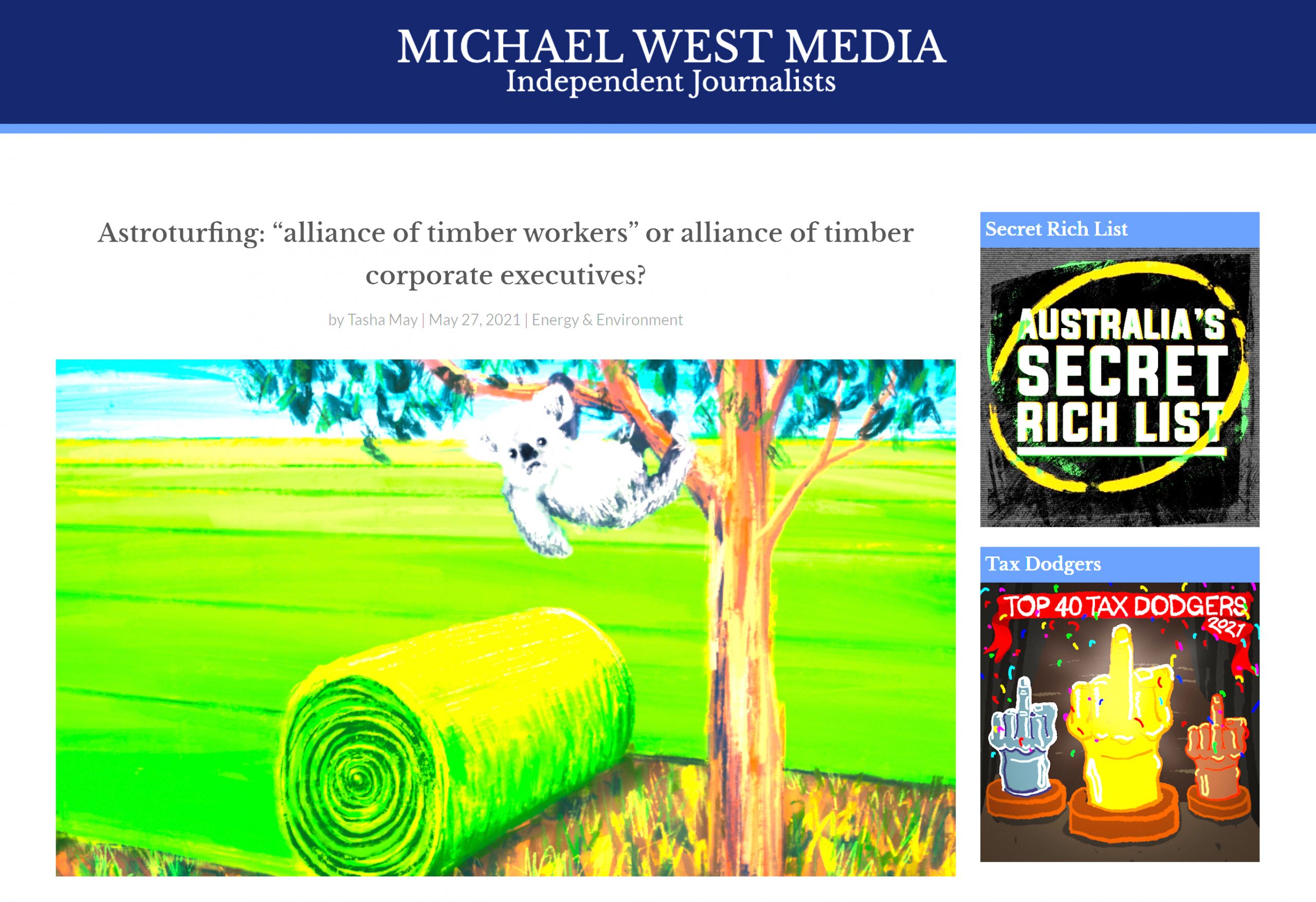 Astroturfing – Activist Slur or a Badge of Honour

By FWCA Admin9 June 2021Uncategorised
No Comments
Spread the word

Astroturfing – Activist Slur or a Badge of Honour 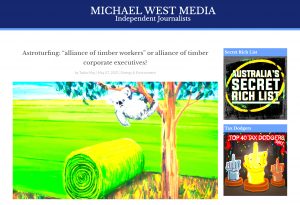 It seems Forest and Wood Communities Australia (FWCA) has struck a raw nerve within the activist community. A journalist, Natasha May, from Michael West Media contacted Justin Law at FWCA with a number of questions and opinions about FWCA. She was tight lipped about what triggered her interest, but the information and questions provided made it clear a hatchet job was on the go. The article was published and if you have a couple of minutes with nothing better to do, go to the link at the bottom of this page.
Ms May had spent a little time at the Guardian, so it might be appropriate to commence this critique with two pertinent quotes from John Edward Taylor, who founded the Guardian Newspaper in 1821.
“Comment is free, but facts are sacred.” “The voice of opponents no less than that of friends has a right to be heard.”
Unfortunately, when it comes to reporting on the native forest industries and associated issues, the code of 21st century activist journalists seems more along the lines of “Opinion is free, but facts are irrelevant, if they stand in the way of the eco-political agenda I subscribe to. The voice of opponents has no right to be heard, unless I use it out of context. Anyone who is genuinely affected by 21st century lockup and burn forest policy, will be undermined by all available means if they try to unite.”
Ms May claims “Peter Rutherford, is a spokesman for South East Fibre Exports, secretary of the South East Timber Association, and a former Forestry Victoria general manager. ” I have not worked for SEFE for almost five and a half years. I have been retired for more than two and a half years. If being a spokesman for SEFE extends to occasional letters to local papers, yes, I was a spokesman. I am the SETA Secretary and I left Forestry Victoria 17 years ago.
To progress the astroturfing argument, Ms May puts FCWA into the same league as organisations associated with the tobacco industry and Coca Cola. In 2020, the Coca Cola brand was valued at US$84 billion or more than AUD $107 billion. In 2020, the two biggest tobacco brands had a combined value of US$205 billion or AUD$262 billion. WOW!
Then we hear of the wicked photoshopping of an Extinction Rebellion banner. WOW! Ms May, if you ever want some background on identity theft and threats of industrial contamination and other criminal conduct carried out by those in the activist industry, feel free to contact me.
Ms May provides Twitter account facts, apparently to refute FWCA being a grass roots organisation. I have spent most of my working life in rural and regional communities and according to Ms May I am one of “the most powerful players in the corporate timber industry.” Despite Ms May’s heady assumption on my industry power, I have been a grass roots timber industry supporter since I started work in the industry in 1972 and particularly after joining the Forest Protection Society in 1989.
Ms May doesn’t seem to understand that most grass roots members of timber communities don’t have twitter accounts to keep in touch with the 700 friends they have never met. Grass roots members are likely to have long work days, volunteer with local community organisations, have family members young and old to care for and maybe keep in touch with family and friends via Facebook, when they have time.
Grass root members need someone to help represent their position, so I have been prepared to give up some of my retirement time to help FWCA represent my and the interests of other FWCA members. I have not received one cent of the work I have done to support FWCA and SETA. Thank you for your reminder to me that I must continue to stand up to junk journalism and junk science on behalf of my family, friends and FWCA members.
Ms May highlights a small cluster of online pro-forestry groups often share and bolster each other’s content, yet makes no comment of the spiders-web of activist groups, who actually opened the way to using social media to spread their view of the world. Why don’t we have a right to be heard Ms May?
Ms May then goes on to give the academics a voice. ” The forestry industry’s strong lobbying, including by organisations such as FWCA, creates an environment in which “it’s quite intimidating as a scientist to talk about research findings or known ecological facts”, said Sarah Bekessy, Professor of Sustainability and Urban Planning at RMIT..”
Professor Bekessy, if scientists want to present “ecological facts,” which don’t make sense in the real forest world, expect to be challenged. The research paper that had to be withdrawn by University of Tasmania earlier this year confirmed that the peer review process is flawed in some, if not more instances and shoddy research findings must be open to challenge.
Professor Bekessy, if you think the challenges we make to your media comments are intimidating, come into our world of the past 35 years and experience the intimidation tactics that so-called peaceful, non-violent direct-action protestors continue to use. A sample from my time with Forestry Victoria is below.
https://www.youtube.com/watch?v=goxsLw443dw
https://www.michaelwest.com.au/astroturfing-alliance-of…/