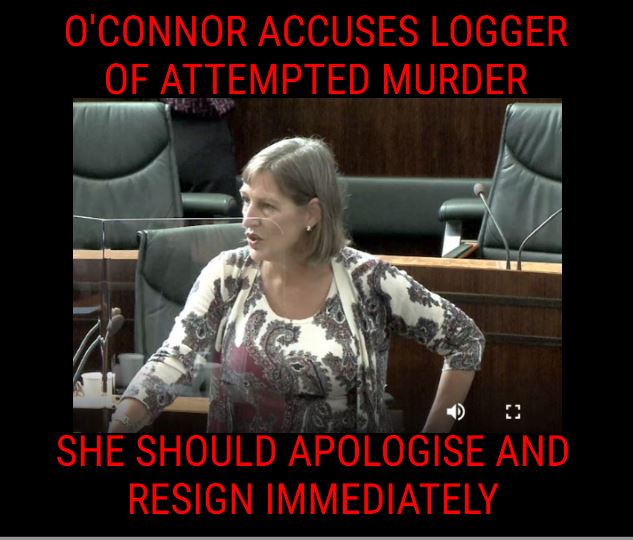 By FWCA Admin10 May 2022Uncategorised
No Comments
Spread the word

Forest & Wood Communities Australia has called for Tasmanian Greens MP Cassy O’Connor to resign after she accused a timber worker of attempted murder.

“O’Connor spent several minutes defending protesters, stating that there has never been any evidence linking tree-spiking to protesters and going so far as to accuse workers of spiking their own trees and pinning it on the protesters,” Ms Wilton said.

“In her next breath she said ‘I do not know if anyone here remembers the car in the Florentine that had the protesters in it and some loggers came in with baseball bats and effectively tried to kill them.’”

Ms O’Connor was referring to an incident 10 years ago where protesters blocked a forest road with a car and provoked a forest contractor attempting to drive past.

Just prior to the incident, the contractor had lost a child in a family tragedy, and millions of dollars of machinery had been vandalised as part of a withering campaign by anti-forestry protesters, which had also cost his business approximately $10,000 a day.

Under this extreme provocation, the contractor let his emotions get the better of him and his actions of breaking windows of the car while the protesters inside hid under a blanket were videoed by another protester hiding in the bush.

The contractor was convicted of common assault, a far cry from attempted murder.

“For O’Connor to defend the actions of the protesters, which provoked an emotionally exhausted forest contractor to the point where he would finally break down, is bad enough,” Ms Wilton said.

“To then accuse the contractor of attempted murder is unconscionable.

“It’s this kind of provocation and victimisation that these new protest laws are designed to protect forest workers against.

“The contractor she has accused deserves an apology and O’Connor does not deserve to hold office and should resign.”