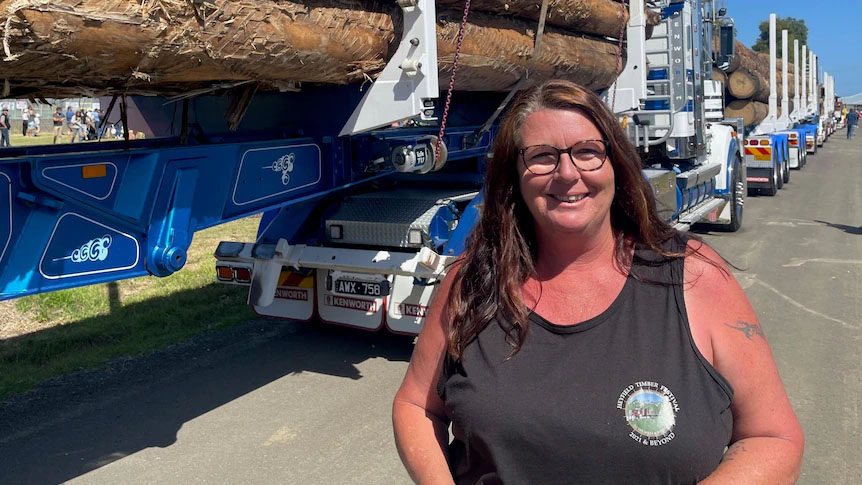 By FWCA Admin9 May 2022May 10th, 2022Uncategorised
No Comments
Spread the word

One of the Gippsland timber community’s most respected members has joined Forest & Wood Communities Australia as National Membership Manager.

Felicia Stevenson, who is president of the Heyfield Timber Festival committee and whose family has been in forestry for three generations, brings a wealth of knowledge and connections to FWCA.

“My husband and sons work in forestry and my father was a mill worker and drove log trucks and my pop was in timber as well,” she said.

“We’ve lived in the Heyfield area for all that time and are seeing forests that were harvested decades ago now being locked up for their ‘high conservation value’.

“It’s hard to understand the angry opposition to our family’s work, given how these forests have been managed and have regrown in such good condition.”

Felicia started the Facebook page Support the Future of Australian Hardwood Forestry after people close to her were put out of work for some time by an activist media stunt.

“We get court injunctions or biased media reports or activists in tree sits, which are all harming our families in ways most people don’t realise,” she said.

“My heart goes out to them because they silently suffer under the mental strain of not knowing what their futures will be or even if they can put food on the table because of these interruptions, injunctions and lock ups,” Felicia said.

“I know exactly how they feel and I reckon FWCA gives us all a voice and an association we can all get behind. We’ve got to band together if we want to survive.”

Felicia has served as a Member Delegate on the FWCA Advisory Council for 18 months as a representative of her community, and managing director Justin Law said she now can grow the association in a more dedicated role.

“It was a no-brainer to have Felicia on board given her depth of involvement in the timber community at a grassroots level,” Justin said.

“She is one of 10s of thousands of people in our timber towns around Australia who are angry, frustrated and scared because of the treatment of their communities by short-sighted government policy, dodgy science and organisations which profit from distorting the impacts of forestry.

“FWCA was formed as a not-for-profit grassroots association to bring us together as one loud voice to speak up and tell our story.

“Our mission is to save our jobs and our communities by raising awareness of the impacts on regional Australians and Felicia has already made great strides in achieving that goal.”

The Heyfield Timber Festival, run in February this year for the first time in 27 years, was the result of Felicia’s hard work and ability to bring people together.

“The festival was a way for us to take our minds of the stress we face and remember the good things we do, not just for our communities, but everyone who values wood products,” she said.

“We’re looking forward to the next one and in the meantime, I’m stoked to be joining the FWCA team.

“They are people who in it, are dedicated and are prepared to stand up and fight. And they must be having an impact when the people they stand up to take legal action to try to shut them up.”

Our Advisory Council is made up of 16 representatives of the people who live in timber communities and work in our forests, and we now have 462 members.

“That number is growing, thanks to Felicia, and we are hoping to bring together as many of the 10s of thousands of regional Australians who support our timber industry and want to see it thrive,” Mr Law said.