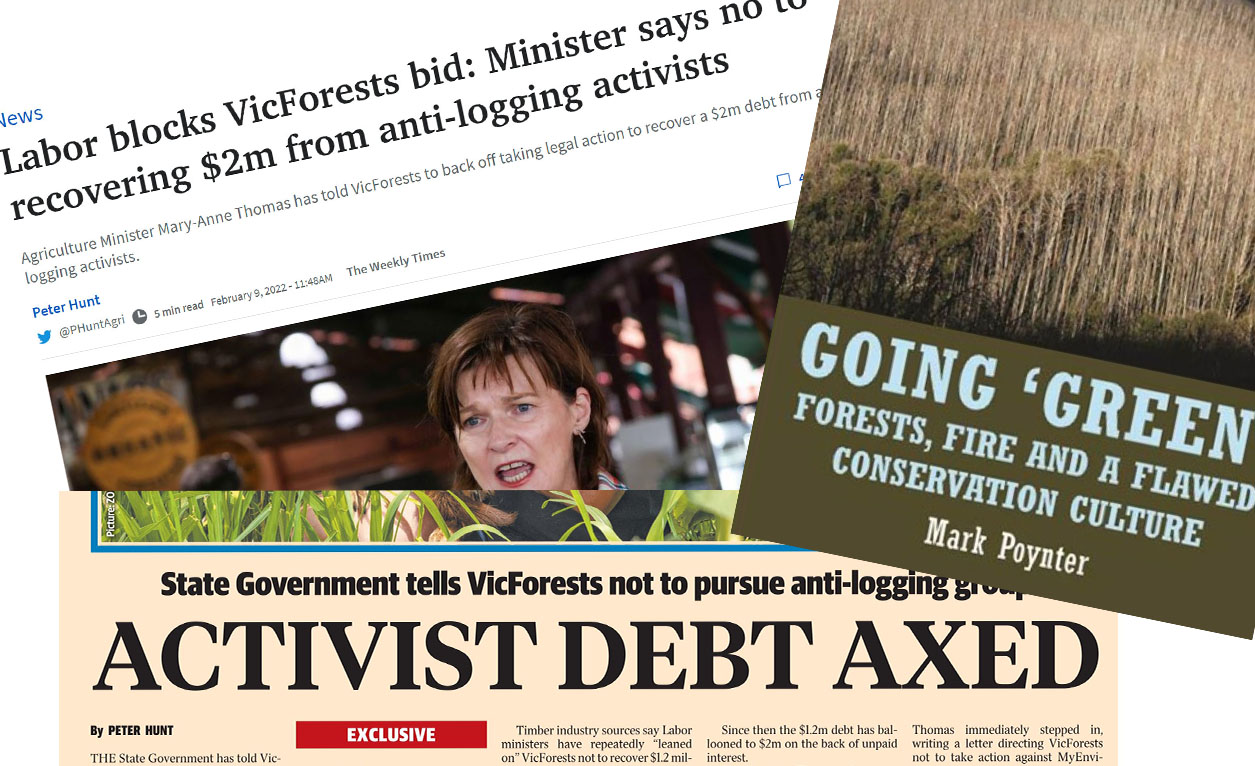 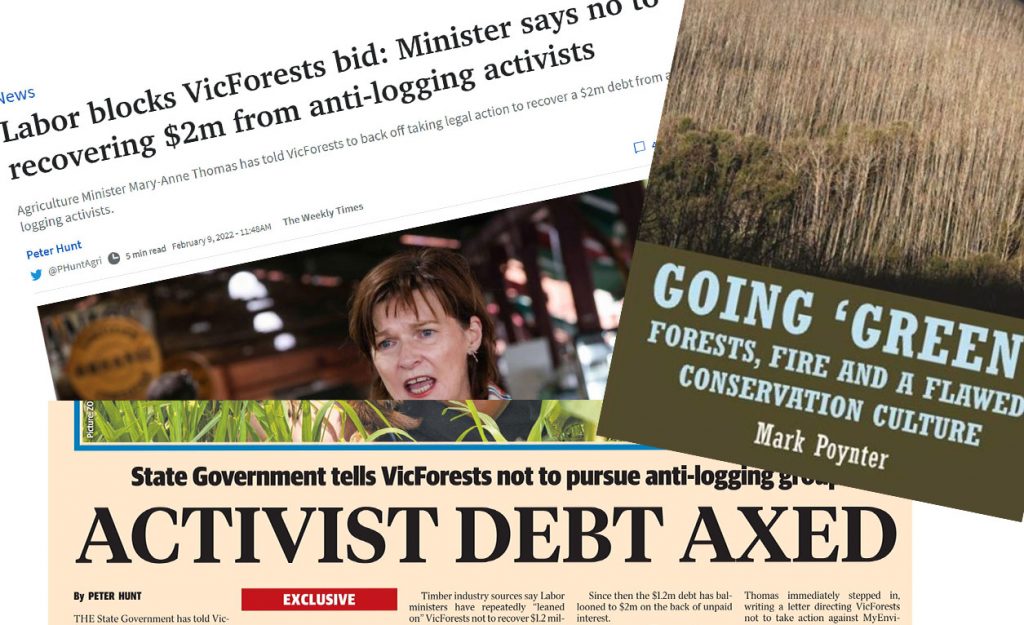 When a State Government Minister admits to discouraging its own agency from pursuing a $2m debt owed by anti-forestry activists, the unholy alliance between Government and activism is laid bare.

It’s a collusion which appears to have informed many baffling government decisions on forestry, not least of all the disastrous announcement in 2019 to end Victoria’s native forest industry, and when the dots are connected, at the centre of it all is the Great Forest National Park (GFNP) campaign.

The GFNP campaign was orchestrated by activist organisation MyEnvironment and at least one academic from the Australian National University’s Fenner School prior to the 2014 State election.

It was the culmination of a growing anti-forestry movement stirred up after the 2009 Black Saturday fires. Timber harvesting was falsely blamed as a key cause for the disaster (ignoring the massive fuel build up and the weather conditions of the time) and the anti-forestry lobby was incensed timber harvesting should continue afterwards.

Leading the charge was MyEnvironment which in 2012 took VicForests to the Supreme Court to halt timber harvesting in forest near Toolangi. It failed and was court ordered to pay $1.2m in costs. The costs have not been paid and have attracted interest which puts the total figure at around $2m.

Shortly after MyEnvironment’s failure in the courts, the fringe group turned its focus to the GFNP campaign and was successful in achieving enough traction to turn it into a key political platform.

The Greens were all over it like seagulls on a chip, but they would never get enough power to enact such a proposal. Meanwhile, Labor was pulling out all the stops but still needed some kind of eco policy to challenge The Greens for key inner-city Melbourne seats.

The ANU-backed GFNP must have looked ripe and taking it out from under The Greens would have been too good to resist. So it allegedly promised an academic that it would declare the GFNP if it should win the 2014 election.

(This key moment is mentioned in Mark Poynter’s book Going ‘green’: Forests, Fire and a Flawed Conservation Culture – 2018, Connor Court Publishing Pty Ltd. It’s a must read for anyone interested in the relationship between anti-forestry activism, academia and government policy.)

It’s a promise the Government did not keep, thanks to intervention from the CFMEU, and, as a result, the powerful enviro lobby went to DEFCON toys-out-of-the-pram. It wanted its GFNP and would hold its breath (and the Labor Government to account) until it got one.

Even the Andrews Government’s announcement in 2019 that it would shut down the native timber industry by 2030 was not enough to pacify the raging enviro baby which has since doubled down on its anti-forestry campaign.

Its tantrum has manifested itself in a withering and sustained assault on state forest agency VicForests which is playing out in the courts, in media outlets sympathetic to the anti-forestry movement and apparently now in the office of the Minister for Agriculture.

If it brings down VicForests, there is no native timber harvesting and the way to the symbolically significant GFNP is open. Success would prove just how powerful the anti-forestry lobby is.

Perhaps their plan is to embarrass the Government by falsely accusing its forest agency of “illegal logging” as part of a blistering smear campaign.

At the very least the lobby is costing the taxpayer 10s of millions of dollars in legal fees as VicForests defends an ongoing barrage of vexatious litigation imposed by activists exploiting a loophole in the Sustainable Forests (Timber) Act 2004.

They don’t seem to care they are ordered to pay costs when their cases get tossed out of court (which they invariably do) and why would they? The Government has basically told one of its agencies to go easy on recovering those penalties from the activists who are trying to cripple it in the courts.

That $2m owed to VicForests would go a very long way to compensating the dozens of people who are suffering financially because of the impacts of Victoria’s activism culture.

They are the collateral damage in all of this along with the timber communities which face an uncertain future thanks to the ongoing court injunctions which are crippling timber supply.

These are assaults on a timber industry which everywhere else in the world is recognised as an environmental necessity.

The people who work in it should be celebrated as the true environmentalists who carefully manage the forests under strict guidelines to reduce our reliance on plastic and concrete, or timber sourced from less environmentally sensitive countries.

Instead, we have become resigned to a Labor Government which seems to have forgotten its charter of protecting the working class and, as shown by its region-destroying policies, is more focused on pacifying the inner-city enviro elite stirred up by finely orchestrated activist misinformation.

Which brings us to the 2022 State Election and the expected political challenges of Covid and the Red Shirts scandal faced by the Government. In all-important inner-city electorates, we are seeing Labor moving the pieces to again do battle with The Greens on environment issues.

Forestry is the easy target, so it’s not hard to imagine that the Great Forest National Park will again be a key campaign platform.

And helping that along is the anti-forestry lobby which is making sure the issue is kept front of mind.

One of MyEnvironment’s directors at the time of the failed court action in 2012 which resulted in the $2m debt was Sarah Rees, who now sits on the Forest Stewardship Council. Later last year, as thoughts turned to the 2022 State election, she and Professor David Lindenmayer, who was a keynote speaker at the GFNP launch in 2014, launched and marketed a book together.

Its title is The Great Forest.